10 Hilarious Dad Texts That Will Leave You Laughing

Whenever you get a text from your dad, you can be pretty sure it has a good chance of containing a silly typing mistake or an awful joke that will leave you cringing rather than giggling. These dads, however, actually got it right and sent some of the funniest messages ever, proving that dad jokes might not be so terrible after all.

This Dad Was Clearly A Frat Boy 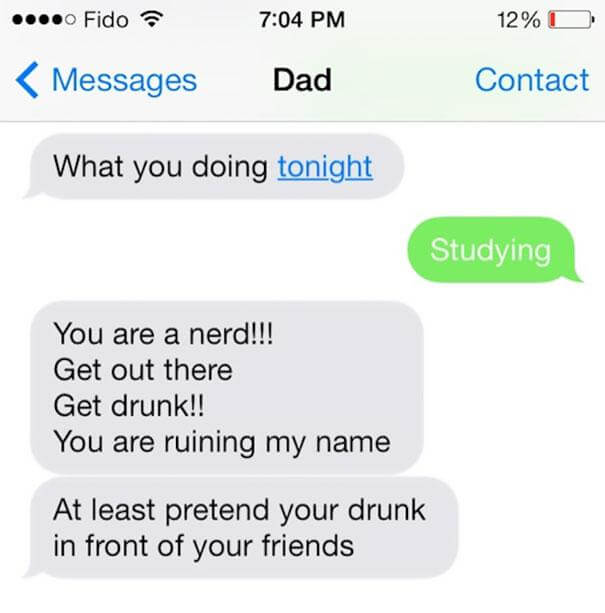 Dads often like to see their kids as little versions of themselves. They hope that their sons and daughters will follow in their footsteps, doing the same things they did and honoring their good name in all the right, or wrong, ways.

This dad, for example, is hilariously annoyed that his child would prefer to be studying than going out and getting drunk with their buddies like he used to. 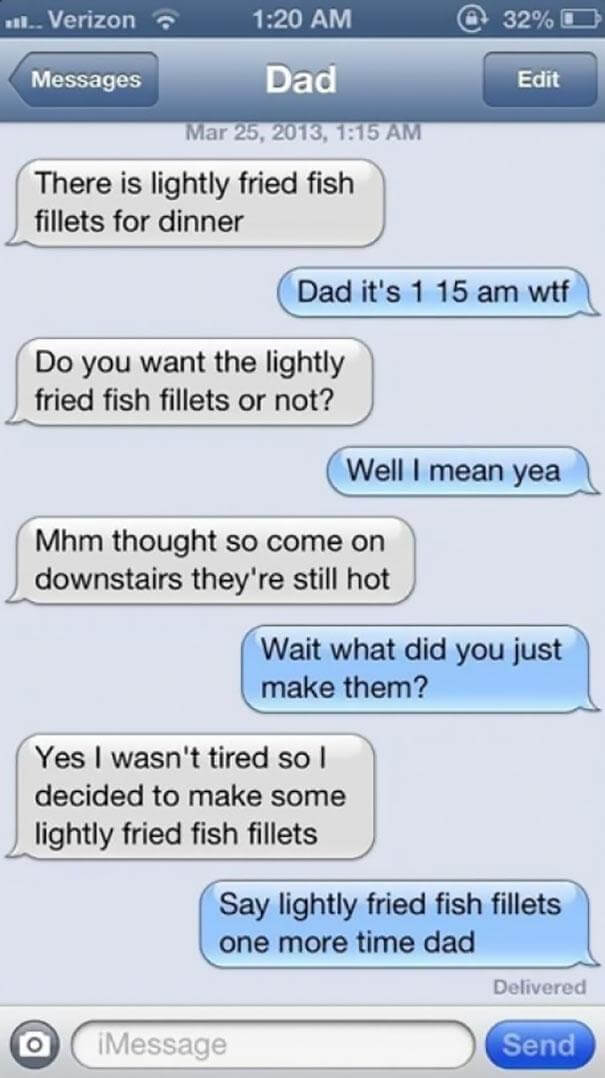 This dad is clearly a culinary expert and needs the whole world to know about it. Even at one in the morning, he decides to text his kid and let them know that he’s down in the kitchen cooking up some treats.

This Dad Learned A New Word 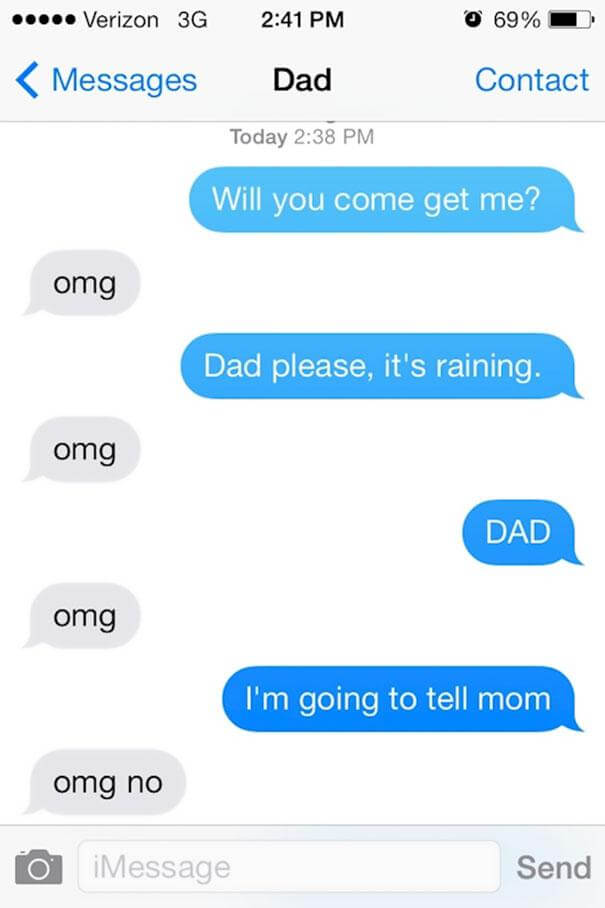 Everyone knows that when a dad learns a new word, they tend to start using it as often as they can and throwing it into conversations all the time just to amuse or annoy their family and friends.

Clearly, this dad just got hold of his new favorite word: OMG. He can’t stop using it, no matter what his kid says, and it’s only when the threat of telling mom enters the conversation that he finally changes his tune. 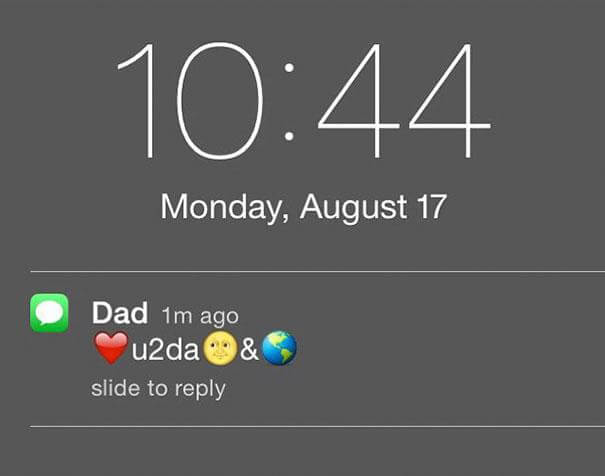 There’s nothing funnier or stranger for a kid than seeing your parents start using the same terms and phrases you use each day. It just seems weird to see them typing out things like ‘LOL’ or using emojis, but this dad is clearly a master.

He managed to take a whole sentence and cram it right down into just a few characters and symbols. It’s a lovely message and made twice as funny by the fact he used so many little abbreviations.


Survival of the Fattest: Animals Who Love Food… Maybe a Little Too Much


What Chris Pratt, Taylor Swift, and Kevin Hart have in Common?


Best Strollers by Category You Can Buy on Amazon Right Now

This Dad Has His Priorities In Order 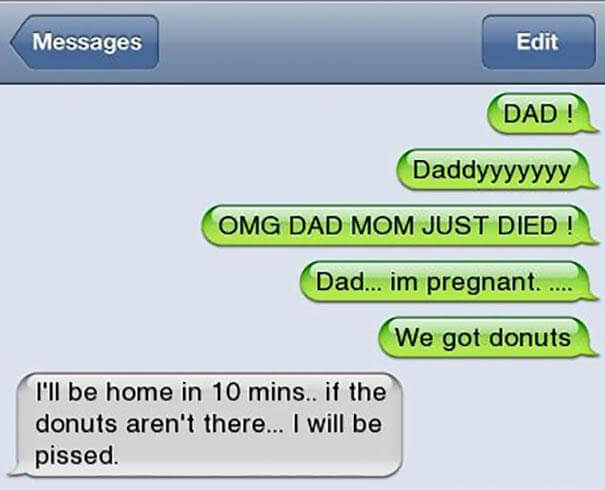 They say that honesty is the best policy, and this dad is about as honest as they come. His daughter sends him several scary messages without getting a single response, but as soon as she mentions donuts, he’s on his way home.

This is a dad that apparently has his own priorities in order. His wife died? No big deal. His daughter is pregnant? That’s not important. What matters the most is those sweet, glazed rings of deliciousness.

Always Thinking One Step Ahead 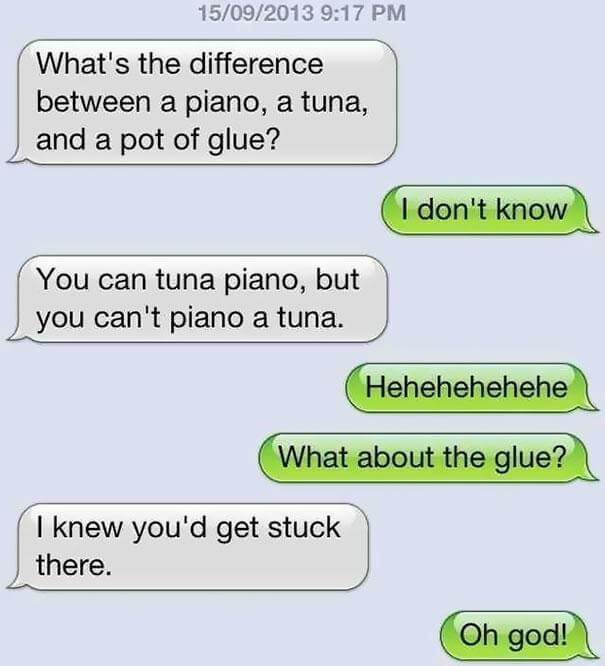 This dad is setting a new standard for dad jokes all over the world. A dad joke is typically pretty basic and might make you smile slightly, but this one has a whole new layer to it.

Just when the kid thought the joke was over and was confused about one of its aspects, the dad strikes twice with a double punchline to bring it all home. Honestly, this dad is the master of dad jokes and deserves some kind of prize. 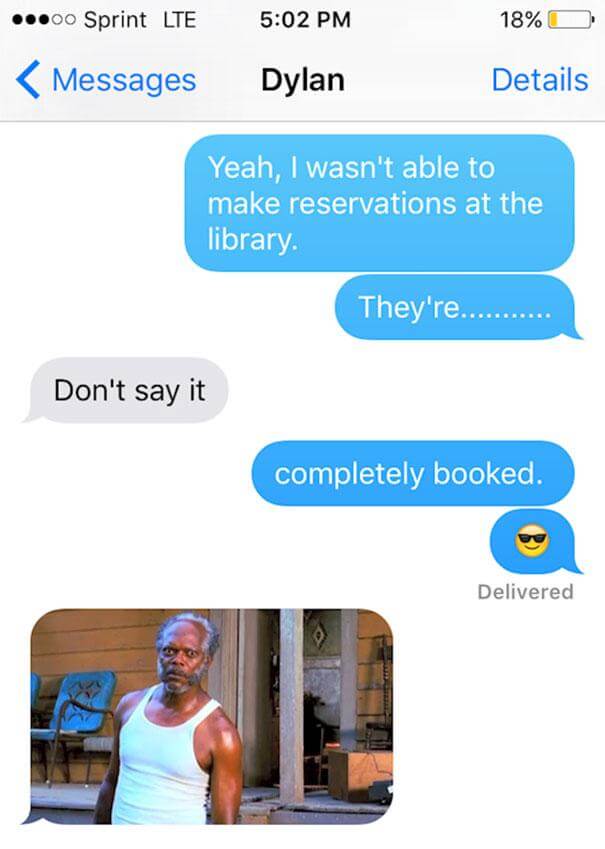 Some dads pass on their intelligence. Others pass on their good looks or bad habits. This dad, it seems, has passed on his sense of humor, as his kid sent him a text with an absolutely terrible library-based joke.

Usually, we see dads making bad jokes and kids responding with memes, but this case shows the total opposite. In fact, the dad even seems ashamed that his child could make such a terrible attempt at a joke and responds in the only acceptable way: with a hilarious image.

That’s All That Matters 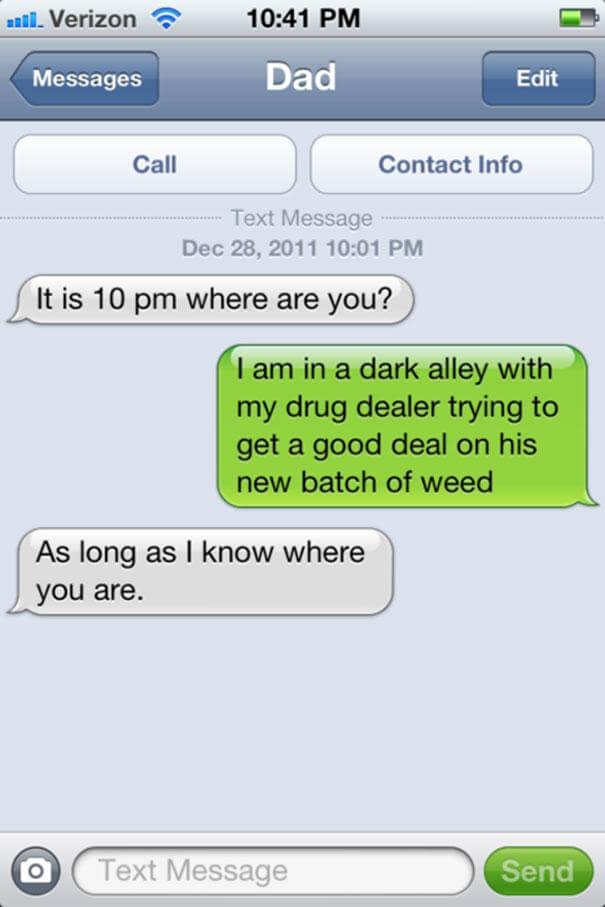 Some kids don’t know how to deal with their dad’s sense of humor. The best advice in this situation isn’t to just cringe or ignore them, but to go along with it! That’s exactly what this kid did when their dad asked what they were doing late at night.

The kid laid out a terrible scenario that would leave any parent shaking with fear, but apparently has an excellent humored connection with their father, who responds with the timeless phrase “As long as I know where you are.”

Such A Sweet Message 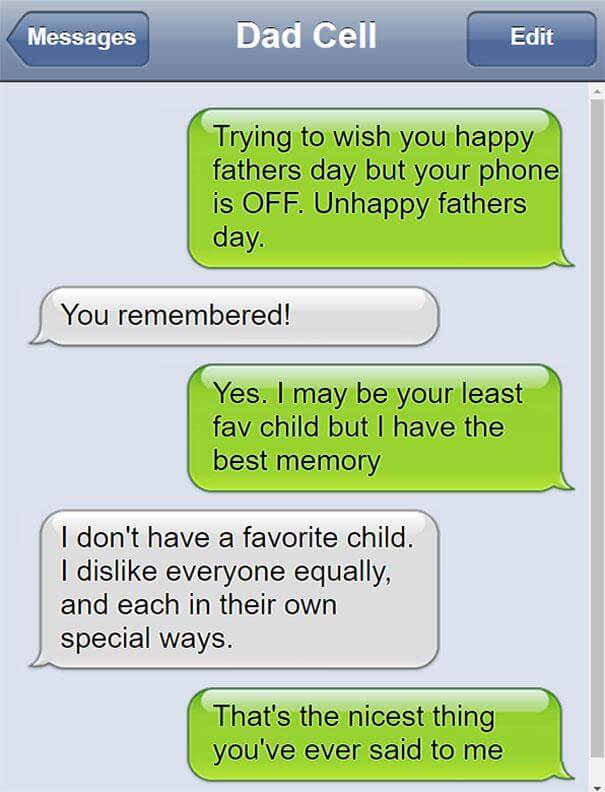 Moms are known for being very liberal with their affection. They’ll shower kids with hugs and kisses and never stop saying “I love you” and ending their text messages with lots of kisses, but dads tend to be a little different.

Dads are often quite awkward or shy about expressing their feelings and tend to rely on humor as a way to deal with that awkwardness. This dad, however, is hilariously honest and open about ‘disliking everyone equally’ and not having his own favorite child. What a sweetheart.


Busy Mom? Don’t Let This Be an Excuse. These Beauty Tips Will Unleash a New You in No time 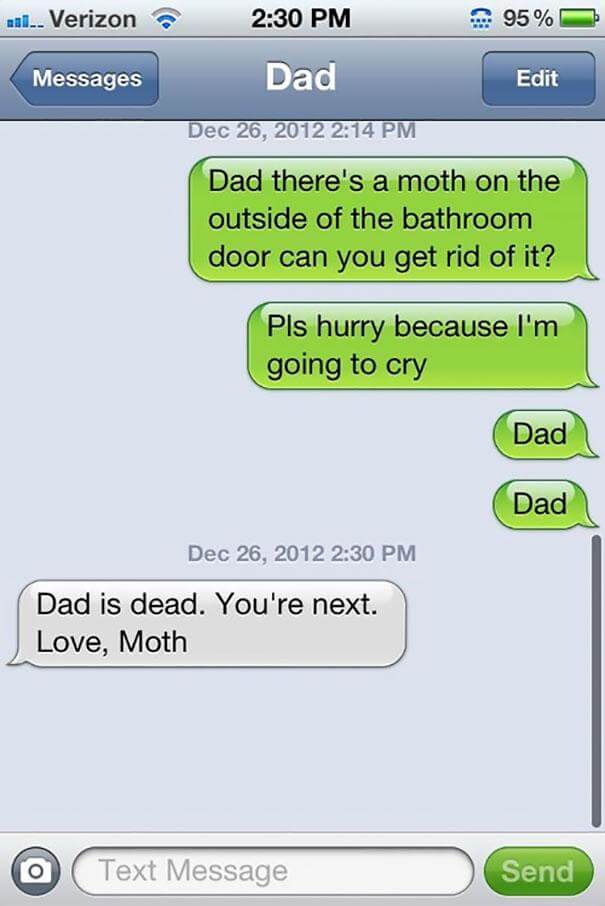 Dads can be annoying, but they have their uses. For example, whenever you see a big spider or another creepy crawly hiding out in your bed or on the bathroom door, you know exactly who to call.

This dad, however, decided to play a hilarious prank on his kid by writing text from one of that creepy crawlies. The kid was already scared of months but will clearly be scarred for life after this amusing message.

Best Strollers by Category You Can Buy on Amazon Right Now

Her Dog Kept Barking at Her Pregnant Belly, And It Saved Her Life

10 Hilarious Dad Texts That Will Leave You Laughing