25 Most Amazing Restaurants in the World

There is an old cliché in real-estate saying “Location, location, location.” This usually refers to the value of the property, but when it comes to opening a restaurant, the choosing of a perfect location can make a big difference between having a good dinner to having a spectacular, breathtaking, and mesmerizing experience.

Here are some restaurants that didn’t settle for high-quality cuisine and chose the most amazing locations, that offer a once in a lifetime experience.

On a beautiful cliff in Phuket, one of the most beautiful locations in southern Thailand is a piece of paradise, known by the name of Baan Rim Pa. Translated as “The house on the cliff”, the name of the restaurant does wrong with this beautiful establishment. With its open balconies viewing the amazing sights of the Andaman Sea, this is much more than just another house on a cliff.

When you open your restaurant on a cliff in the Swiss Alps, besides taking care of the heating system, there is not much else you need to do. This is exactly the special charm of the Hotel Edelweiss and Restaurant. The humble hotel is keeping the interiors simple and comfortable, leaving surrounding mesmerizing views to do all the work.

It would probably be hard to find a more breath-taking location than the one hosting this small restaurant in Zanzibar. The Rock, as its name might imply, is positioned on a rock in the middle of the Indian Ocean, offering its guest a special panoramic view of the ocean and the coasts of the small Eastern-African Island. On low tide, the visitors of the restaurant can reach it by foot, whilst on high tide, they could use the boat services offered by the restaurant unless they fancy a swim.

The Grotta Palazzese restaurant, Situated at the bottom floor of the Grotta Palazzese Hotel in the Bari region in southern Italy, is opened for public only during the summer times. The reason is quite obvious- the restaurant, carved inside a limestone cave viewing the Adriatic Sea, just a few feet above sea level, could be rather cold in wintery days.

Best Strollers by Category You Can Buy on Amazon Right Now

If you are suffering from a serious case of Thalassophobia (fear of the sea) this next restaurant might not be your first choice for a nice dinner with your loved ones, but you don’t have to be Captain Nemo to agree this unique restaurant is one that could change your perspective on life. The Ithaa Undersea Restaurant, located 16 feet below the surface in the Rangali Island of the Maldives, is the closest you will get to eat at the bottom of the sea, with a frontline view of the inspiring sights of the depth of the ocean.

The Sirocco restaurant in Bangkok is situated on the rooftop of the luxurious Lebua Hotel in Bangkok. From its location at the top of the world, on the 63rd floor of the hotel, Bangkok’s most iconic restaurant offers a spectacular panoramic view of the Thai capital, alongside a high standard and awarded cuisine.

The White Rabbit restaurant is located on the 16th floor of Smolensky Passage, a business center in the heart of Moscow, under a beautiful panoramic glass dome that views some of the city’s most monumental sights. Next to the trendy décor and the amazing view, the restaurant is reinventing the traditional Russian cuisine, taking it to a whole new level.

The Maiden’s Tower, out looking the coasts of the Turkish city of Istanbul, was first built in the 12th century by a Byzantine emperor as a protective tower. The original tower was destroyed during an earthquake in the first decade of the 16th century and was burned in the 18th century, only to be rebuilt as a lighthouse. Today, the tower features a restaurant and a café, occupying the first and top floors of the lighthouse and offer a wonderful view of the ancient city. To get into the restaurant, the dinners must use one of the many private boats that round up to the tower several times a day. 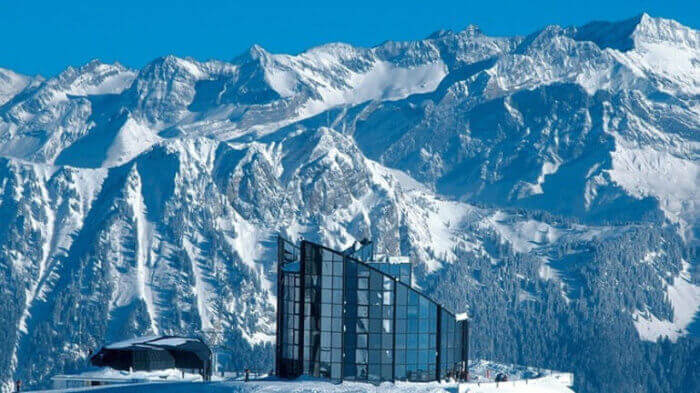 If you remember anything from your Greek studies, you probably know that in Greek, the meaning of the word “Kuklos” is “Cycle”, or “Revolving”. Now that you know, Care to guess what is the special feature of this Alpine restaurant? You guessed right, the Swiss “Le Kuklos” is a revolving panoramic restaurant, which completes a full cycle every 90 minutes, giving its visitors the opportunity to enjoy the full range sights visible from its location on a 4,000 feet high mountaintop.

Ladies, This One’s For You: The Best Foods for Women to Eat

Welcome to Babylon. In the 122nd floor of the tallest building in the world, located in Dubai, you could enjoy the fine cuisine of the award-winning Chef Jerome Lagarde, while reaching to the stars from the height of 1,447 feet. Besides being the holder of the Guinness world record for the highest restaurant from ground level, the restaurant is offering special seasonal menus next to privet dining experiences.

Sitting on the balcony of the beautiful Ristorante La Sponda, you could view the amazing colorful views of the medieval village of Positano in southwest Italy. The Michelin star restaurant is known for its local ingredient based menu, along with the special atmosphere caused by the hundreds of candles scattered around the fine Mediterranean establishment.

This next restaurant is maybe enjoying a rather gimmicky height, but it sure does the trick. Imagine having a dinner at the top of a treehouse, somewhere in the middle of a tropical forest, while the trained waiters slide to your luxurious, comfortable nest on special cords above a frightening abyss. No need to imagine, because this is exactly what awaits you in the Treepod Dining experience in the Koh Kood Island in eastern Thailand.

Opening a restaurant on the second floor of one of the world’s most famous monuments is a big step in creating a special, well, monumental experience. This is the case with Le Jules Verne, which is not just a high standard French restaurant, and not only offering a unique Birdseye view on the streets of Paris but is doing it from the heights of the Eifel tower. Climbing the Eifel Tower has never been more appealing.

From its wooden lodging atop the cliffs of Big Sur, California, The Sierra Mar restaurant offers more than just breathtaking views. The fine cuisine offered by Chef John Cox is just one of the bright spots in the beautiful Post Ranch Inn, the restaurant is located in, and integrating beautifully with the wild nature it is based in.

From the most southern point of Baja California Sur, Sunset da Mona Lisa invites you to enjoy its beautiful shores and the hot Mexican sun while enjoying classic European cuisine- a pacific cocktail in one hand and rigatoni in the other, one might say. The restaurant features pastoral ponds next to local cacti, but the jewel in the crown is, of course, the endless seas of the Pacific Ocean.

Photo By The Rive CafeThe River Café, unlike many other restaurants in this list, is not located on a high mountain, nor in a tropical forest or on a rock in the middle of the ocean, but the view it offers from its large windows is one of the most famous and spectacle of them all. Just sit back, take another sip of your cocktail and take a look at Manhattan at the palm of your hand.

Ever wanted to eat in a 180,000 years old cave? Just take the next bus to the Ali Barbour restaurant, only 18 miles south of the city of Mombasa in Kenya. The restaurant is located inside the prehistoric cave, which was kept in its natural form by the adventurous restaurateurs. The diners are seated under the open ceilings of the cave, in the natural chambers of the cave, which go up to 32 feet below the surface, lighted by the stars and hundreds of candles.

The famous Blu Bar is located on the 36 floor of the Shangri-La hotel in Sydney, overlooking a panoramic view of the city, high above the monumental Opera House and Harbour Bridge and Darling Harbour. Unlike the other restaurants in this list, the Blu Bar is actually a bar, but we just couldn’t ignore it, and it is easy to understand why. From the heights of the reputed establishment, you could see the whole city spread at your feet, its lights flickering at your eyes, leaving you at the top of the world.

The Belmond Sanctuary Lodge is the only hotel located within walking distance from the ancient Inca keep of Machu Picchu. Besides inviting its visitors to enjoy the outstanding untouched ancient plains of Andes, the hotel is offering a unique Peruvian culinary experience in its high quality and reputed restaurant.

Torre d’Alta Mar, translated as The High Tower by The Sea, is a restaurant located 246 feet above sea level, in a beautiful panoramic tower next to the shores of Barcelona. The tower was originally built for the Barcelona International Exposition in 1929 but was deserted during the Spanish civil war. In 1996 the beautiful cable cart leading to the tower was restored, creating an exciting new opportunity for the visitors to the restaurant, which overlooks the Catalan city from above in its utmost glory. 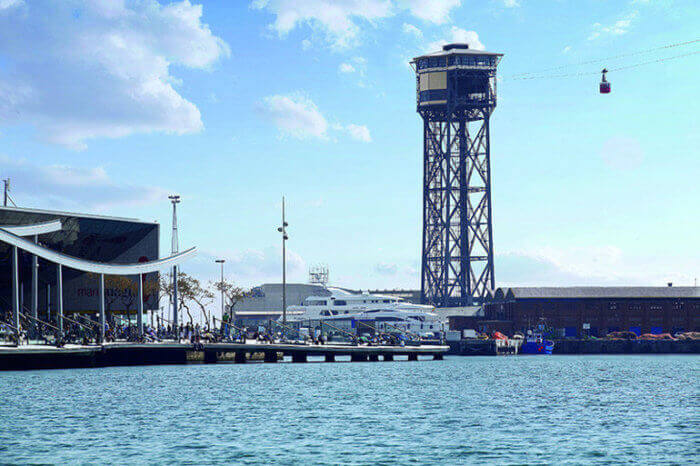 Imagine having a nice dinner with a view of the cradle of civilization, where the ancient ancestors of the humanity as we know it had drawn its origins from. Now stop imagining. Strofi, a unique restaurant in the middle of Athens invites you to enjoy its special Greek cuisine in a magical atmosphere, with a perfect view of the Parthenon, on the hill of the Acropolis. In other words, here is your chance for a once in a lifetime historic meal.

A visit to Bali couldn’t be complete without a dinner in the middle of the tropical forests of Indonesia’s most celebrated province. The Ayung Terrace, located on the balcony of the four seasons hotel resort, is offering beautiful views right into the heart of the Ayung River Valley. Next to the breathtaking sights of the valley below, the diners are presented with traditional Indonesian cuisine, followed by themed dinners and Balinese cooking classes.

While you are already in the neighborhood, why not enjoying the views of the Indonesian forests from another beautiful point of view in the La View Restaurant, an intimate fusion restaurant, which serves south-east Asian cuisine infused by the traditional French culinary art. Be sure to have a romantic dinner in one of the restaurant’s Bird nests, a unique set of natural terraces, floating above the beautiful Ayung River.

This South African Estate, located in the Stellenbosch Valley, just 30 miles outside of Cape Town, is the perfect place for fine cuisine and wine lovers. The Delaire Graff Restaurant, overlooking a beautiful vineyard, mesmerizing gardens and the amazing views of the Banhoek Valley, is definitely one of its kind paradises.

Here is one location in New Zealand that wasn’t filmed during the “Lord of the Rings” saga, but even though Peter Jackson has neglected this piece of jewel, we couldn’t close this list without a small trip to the Skyline’s Stratosfare Restaurant & Bar, which is located at the top of the Skyline Gondola of Queenstown. The panoramic views visible from the restaurant’s windows will keep you mesmerized, while the kitchens will make sure you will not hunger, with its delicious New Zealand Cuisine.

Eating the Rainbow: Superfoods for Kids